Women needed guts to live in the Old West and Sage Cane had an abundance. Finding herself penniless and in debt after the death of her father, then abandoned at the altar by a fortune-hunting scoundrel, she headed for Colorado gold country to take possession of the hotel she inherited from her Aunt Hannah “Honey” Wild. When she arrives, she is shocked to discover the hotel is really a bordello called Wild Mountain Honey Pleasure Palace. She announces her decision to close it down, but meets resistance from sexy Sheriff Bridger Norwood who is convinced it has to remain open in order to keep the peace in the rough and tumble mining town.

But Sage wasn’t born to let adversity keep her down or men control her destiny.

It was a town of, by and for men with nothing for women. Not a slip of silk or froth of lace could be found anywhere outside the bordello. While the men mined for gold, drank in the saloons, gambled at the card tables, or visited Wild Mountain Honey, the wives were left behind to scrabble together a home in tents, huts and dugouts. That is, until Sage Cane secretly opened a charm school to teach them how to dress for adornment, whisper into a man’s ear, and practice the fine art of seduction.

SAGE CANE’S HOUSE OF GRACE AND FAVOR vividly brings to life the hardships and dangers women faced in the rugged frontier towns that catered to men. Secrets are revealed and secrets are kept, but women did what they had to do to survive in this story of a town forced to rise to the standards of its women.

Christy Hubbard introduces the most unforgettable charmer since Scarlett O’Hara in a wild and wonderful tale of girl power in the Old West! 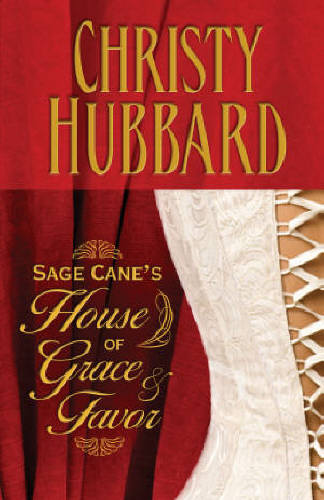 What They’re Saying…
“Cinch up your corsets and enjoy the romance!” – Joanne Sundell, award winning author of PARLOR HOUSE DAUGHTER

“I loved it! . . . Definitely a book all western romance fans must have.”
– Donna MacQuigg, author of NEVER TOO LATE

“Ms. Hubbard unfolds this story in delicious layers filled with lots of information about life in the Old West. . . details are sure to please western history buffs. . . great descriptions and enjoyable characters will take readers on a wonderful trip back in time . . .”
– LOVE WESTERN ROMANCES